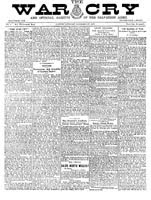 Why a "War Cry?" Because The Salvation Army means more war!" William Booth, Founder-General of the Salvation Army, certainly favoured the 'in your face' approach. With these words he began the front page article of the first issue of The War Cry, on 27 December 1879.

Today, the 'fight' against poverty takes many forms, from questions in parliament to individuals giving a few pounds to a homeless charity. But Booth's radical eye saw deeper than mere deprivation and squalor: he saw inner lostness, people without hope because God's love was not made real to them. Some churches tried, but in the main, Christians 'walked by on the other side'.

Not so the Salvation Army! The cry of slaughtered millions rises up louder and louder to heaven, crying to our inmost souls, with irresistible violence, to arise and fight more furiously than ever for the salvation of our fellows from the forces of evil which are dragging them drunken, befouled, degraded, wretched down to an eternity of woe. You can feel the passion, the indignation, Christ's own love for the poor! Jesus our King, the dying Jesus of Calvary, still looks weeping on doomed cities and multitudes wandering without a shepherd, and begs us to lay down our lives for them as He laid down his life for us.

If radicality has to do with roots, Booth bores into the very core of them, rebuking Christians for their lethargy, their compromise and their lack of real devotion to the cause of Jesus' kingdom. God will have his own people to repent and do their first works. He will have them abandon forever all friendship with the world, and all parley with evil hearts. Let all that name the name of Christ depart from iniquity. No more unbelief; no more pride; no more worldly pleasure or worldly dress or show; no more covetousness or self-seeking!

Armybarmy.com is the name chosen for a web page run by a think tank and renewal group within the Salvationist ranks. Their wonderfully named Journal of Aggressive Christianity reproduced Booth's original article as the front page of their own first issue in 1999. You can read the General's entire broadside here.
Posted by Trevor Saxby at 14:33 2 comments: 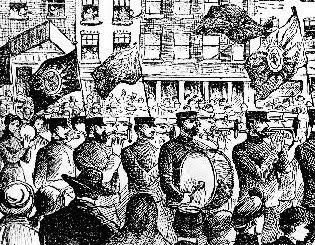 In around 1995 I was speaking to a young Salvation Army cadet in my town. I told him how inspired and challenged my own church was by the witness and the writings of William Booth. "Who?", he replied, in all seriousness. I was dumbfounded! Could it be that a movement had lost sight of its foundation (or at least its founder)?

Happily, it seems as though my young cadet may have been an exception. Having started to look at the radical outreach of the early Salvation Army in my last post, I came across this article. In it, Cadet Christopher Footer, from the Salvation Army Training College in South Australia, makes an impassioned appeal for a return to the radical heart of the gospel and the church.

He warns: This article is idealistic and primitive. It is intended to provoke thought, entice hearts and move bodies to some sort of aggressive action. And he sums up the heart of Primitive Salvationism as "charismatic-flavoured, mission-focussed heroism".

I have no doubt General William Booth would have approved of such a definition - non-theological, punchy, pragmatic and applicable. I can almost hear the "Hallelujah!"s ring out - and Ballington Booth's cornet!

I am encouraged and blessed that a new generation of Salvationists is seeking to examine their roots and look hard at the complex issues of what was for its time back then, and what is still meant to characterise the movement in the 21st century.
Posted by Trevor Saxby at 16:08 No comments: