ANTONY OF EGYPT AND THE PULL OF THE DESERT 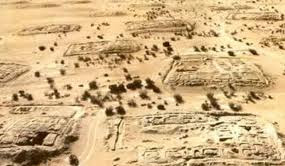 St Antony of Egypt was a true pioneer and radical, whose influence is still felt today. What makes him so remarkable is that he did what he did long before it made sense to do such things, but by doing it he blazed a trail for posterity.

It has become almost a mantra to evangelical Protestant historians that the migration to the desert by hundreds, even thousands of monks, nuns and hermits was a reaction against the official "Christianisation" of the Roman Empire by Constantine I and subsequent Emperors. But all that was 4th century - Antony had already made his statement a generation earlier, at a time when the Early Church was still supposed to be in its bloom.

Born in Egypt about AD 251, his parents died when he was young, leaving him a small fortune. One day he heard a Christian quote Jesus' words: If you would be perfect, go sell all you have, give to the poor, and come follow Me (Matt.19:21). They cut him like a knife. He sold his estate and became the disciple of a godly pastor.

Yet his heart grew restless. He didn't belong to the world he saw around him. He felt a strong pull to the desert beyond the Nile. Here hot and cold, flood and drought engaged men in a daily, physical battle for life itself. To Antony, this mirrored the human soul in its battle between flesh and spirit, love for God and love of self. Here too was a pioneering adventure, where only the real would make it.

So Antony went to live alone in the desert. Friends sent food every few days; the rest depended on his survival skills. His experiences were later dictated to a follower - and what reading they make! He fought boredom and guilt, sexual temptations and hunger for possessions. He gives graphic accounts of battles with demons, but also of sweet times of intimate communion with Jesus. He also learned the importance of manual work for focussing the mind; he wove reed baskets and sold them in town.

Gradually his reputation spread, and men came to the desert to be near Antony. Reluctantly, in AD 305, he left his solitude and spent six years drawing these disciples into a community of hermits. In time, some 5,000 were with him. They lived alone or in pairs in the week, then came together on Sundays for worship, fellowship and mutual support. He taught them the foundational principles that he had based his own life on: love, patience, celibacy, gentleness and humility. Hate all peace that comes from the flesh, he taught. Gain your brother, and you have gained God. Offend your brother, and you sin against Christ.

Antony was well aware of the prophetic power of his act of renunciation of 'normality'. A time is coming when men will go mad, he is recorded as saying, and when they see someone who is not mad, they will attack him saying, "You are mad, you are not like us."

A monastery built in the vicinity of Antony's original community of hermits still exists and is a popular tourist destination. But Antony himself found celebrity unpalatable and withdrew deeper into the desert, where he lived to be 102. He appeared only twice: to strengthen persecuted brethren in Alexandria, and (at 101) to preach against a dangerous heresy. His burial place was kept secret, since he feared men's idolatry. Today, Antony is acknowledged as the father of the monastic life; the man who broke the mould and let passion for Jesus create a new, living 'wineskin' for the Holy Spirit's life.
Posted by Trevor Saxby at 20:09 No comments: