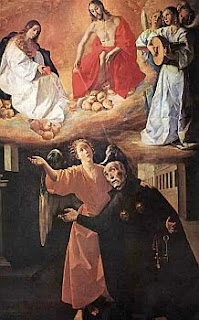 Alonso Rodriguez [1532-1617] is a shining example of ‘blooming where you’re planted’. He didn’t found churches, win crowds to Jesus or conquer heresy. He was one of God’s ‘unknowns’, who won hidden victories: over failure, sickness, loss and heartbreak.

He was a wool merchant with a wife and three children, but by the time he was 40, they had all died and his business had collapsed. His life in ruins, he asked to join the Society of Jesus, at that time a newly-formed mission movement in the Catholic church. They said no: he was uneducated. So Alonso tried to study – and failed. In desperation he begged the Provincial of the order for a chance, who finally said he could be a servant at their mission in Majorca.

At this point a confusion arises: there was another Alonso Rodriguez, born only 2 years apart, who was also in the Society of Jesus at the same point, and who is credited (though some dispute his authorship) with a 3- volume devotional tome, 'The Practice of Christian Perfection'. The two have been widely confused by commentators since.

Our Alonso spent the rest of his life on the island as a porter. While other members took the gospel around the world, Alonso ran errands, delivered messages, received guests and carried bags – for 46 years! This is how he is represented in the painting above: door keys at his side, but behind all his actions an angel of God, and the full approbation of heaven.

He had a nervous twitch and was often sick, but everyone could see he knew God. Students came to him for wisdom and prayer. One, Peter Claver (1581-1654), set out as a missionary to slaves in Colombia because of a prophecy from Alonso. Claver is remembered in the Roman Catholic Church as patron saint of foreign missions.

When Alonso was old, his superiors asked him to write down his experiences. After his death, these papers were found to contain the fruits of much meditation, faithfulness and service to Jesus, whom he loved passionately. Here is an example:

I put myself in spirit before our crucified Lord, bearing great sufferings for me. I consi-der how much I owe Him and what He has done for me. As love is paid for in love, I must imitate Him. Thus, amid hardship and trial, I stimulate my heart and encourage myself to endure, for love of the Lord who is before me, until I make what is bitter sweet.

Perhaps this is what attracted the Jesuit poet Gerard Manley Hopkins to devote a poem in 1918 to God's servant, Alonso Rodriguez:

HONOUR is flashed off exploit, so we say;
And those strokes once that gashed flesh or galled shield
Should tongue that time now, trumpet now that field,
And, on the fighter, forge his glorious day.
On Christ they do and on the martyr may;
But be the war within, the brand we wield
Unseen, the heroic breast not outward-steeled,
Earth hears no hurtle then from fiercest fray.

Yet God (that hews mountain and continent,
Earth, all, out; who, with trickling increment,
Veins violets and tall trees makes more and more)
Could crowd career with conquest while there went
Those years and years by of world without event
That in Majorca Alonso watched the door.

Posted by Trevor Saxby at 17:14 No comments: 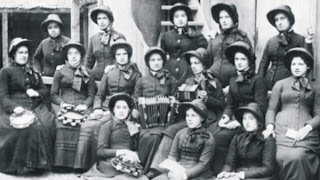 The great question in most churches which are at all earnest in their work, is how to reach the masses. This isn't some present-day church growth report; it comes from an English newspaper, the Northern Daily Express, of 4th March 1879, and concerns events in Gateshead.

The journalist comments that the section of the community that lies outside the usual compass of religious life comprised most of the audience. More unusual still, the work which experienced ministers and the ordinary agencies of churches had failed in, has been attempted by a few young women. These were the “Hallelujah Lasses”, the stormtroopers of the early Salvation Army.

Some six or eight weeks ago, about half-a-dozen young women made a raid under the banner of a Gospel mission among the lowest classes in the town, and they have succeeded in the most remarkable manner... They have got such a hold upon the masses as to tame some of the worst of the characters. A thorough transformation has been effected in the lives of some of the most thoughtless, depraved and criminal.

These women, most in their twenties, hired music-halls for their meetings. Despite the sneers from all sides, within a short time these places were filled to overflowing for three hours, and hundreds are unable to gain admission. The journalist gives a detailed account of two meetings, which you can read here.

What can have enabled these Salvation Army girls to achieve such breakthroughs? Much comes down to the 'first love' fire of a new movement in the flower of its vigour. But we must see in action here the twin elements of BLOOD and FIRE that were to become the Army's motto. A total conviction of the power of Jesus' redeeming blood to save even the worst, together with the freshness of the Holy Spirit's filling (for which Salvationists spent whole nights of prayer) kept them pressing into territory where other feared to go, and expecting results.

They also used the power of personal testimony. The journalist tells of the roughest and most criminal of people glorifying God for their soul's salvation. And the Army used the passion of youth: One youth, who is evidently not more than fourteen, is quite a phenomenon, and certainly has a marvellous utterance for one so young and inexperienced. On Saturday night, we were told, he spoke for twenty minutes, and carried the audience so fully away with him, that in the midst of his address three or four persons went up to the penitent form [benches placed at the front of the hall, where people could come and kneel, pray, repent and receive personal prayer].

The journalist concludes, perceptively, that what is needed in the work now is consolidation - some agency to carry the converts beyond the few simple truths they have got hold of, and to give them an interest in the work when the excitement of the change and the effort has passed away.
Posted by Trevor Saxby at 11:56 4 comments:

The Pain and Colour of the Cross 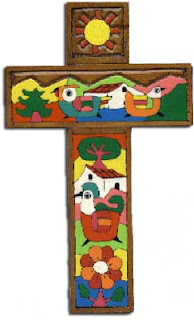 With Easter fast approaching, here's an idea you may not have thought of.

Reading up on Oscar Romero recently, I came across something profound and beautiful that was completely new to me: the Salvadoran Cross.

Its origins lies in the 1960s and 70s, when people fled the brutal persecutions in El Salvador and lived in refugee camps in neighbouring countries. Here they tried to reconcile their pain and horror with their deeply-held Christian faith. What they came up with was very practical: to think of all the things that brought hope and meaning to their lives (children, a sunrise, bible stories, their village, etc) and to paint them in vivid colours on to wooden crosses.

The results are not only strikingly beautiful, they are also a moving expression of the message of Easter: pain, sorrow, hope, devotion and worship meet in the cross of Jesus Christ.

The link above gives some examples and even a template which you can use to design your own Salvadoran Cross. Now there's a different kind of Easter meditation!

Posted by Trevor Saxby at 20:33 No comments: