Power from the Past: the Jeffreys Brothers 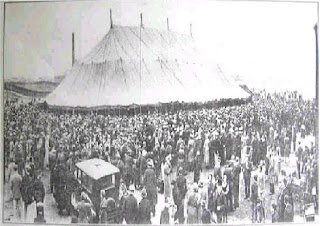 I had not been aware of the existence of the George Jeffreys and Stephen Jeffreys Official Website, but I'm delighted that I found it here. The founders of the Elim Pentecostal Church were nothing if not bold and innovative in obeying the Great Commission to proclaim the gospel.

Their methods were bold and apostolic. In the economic depression of the 1920s and 30s, with dole queues and poverty, they would target an industrial city and rent a large hall. They were unknown, unsupported and often opposed by local churches. Meetings went on for weeks, the hall at first almost empty, but once news of the miraculous signs was out, it would be crammed. After the campaign they would buy a disused building, renovate it together, and Jeffreys would install a man he had trained as pastor of the new church. In this way, several hundred new churches were planted all over Britain.

Here, with due acknowledgement to the Jeffreys blog, is a contemporary report of a campaign which they held in liverpool, UK, in March 1926.


"Revival Fires are burning in Liverpool. Although the campaign only started on Sunday 14th March, by the middle of the week the church was packed out. Hundreds have been saved and there have been many remarkable healings." It was not long before the secular press began to report what was happening in these meetings, including the Yorkshire Observer, which referred to "the extraordinary scenes being reported at a disused Liverpool Chapel." The Daily Despatch of 18th March carried the following report: "Remarkable scenes of religious fervour are being witnessed at the little chapel in Windsor Street. Several remarkable 'cures' have been claimed by sick and maimed people who have been anointed with oil during the campaign. Several of the patients whom the pastor described as being under the power of God, swooned and lay trembling for some moments."

The Daily Despatch went on to list some of the healings that had already taken place including a five year old girl suffering from Infantile Paralysis, a woman healed of deafness, a man from heart disease, and two people from paralysis. On the following day (19th March), five days after the commencement, the Daily Despatch carried the following report: "Hundreds of people had to be turned away from yesterday's services. Queues began to assemble outside the chapel two hours before the meeting commenced. As soon as the doors were open crowds began to clamour for admission, choking the aisles and every available inch of space. A crowd just as large could not gain admission and had to remain outside, while a few yards along the street other evangelists conducted open-air services until long after ten o'clock. So great was the pressure inside that the pastor was unable to anoint any of the people with oil and the service was terminated prematurely. Nevertheless a number of people testified to healing including a woman who had been dumb for many years, and two women healed of deafness."

Posted by Trevor Saxby at 17:33 No comments: 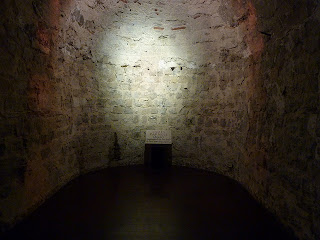 Courageous faith isn’t just for special, brave people. Some of God’s heroes had to overcome serious limitations, even to get started. One such was James Parnell. He was a delicate lad, short for his age and sensitive. He loved Jesus and sensed there must be more than going to the parish church.

In 1653, when he was 16, he heard of George Fox, the leader of the Quakers, who was in prison in Carlisle. Weak as he was, James walked the 150 miles and, fainting with exhaustion, was allowed to visit Fox. We have no record of their conversation, but Parnell was filled with the Holy Spirit and commissioned by Fox to be an evangelist.

He had just two years of life left, but they were amazingly fruitful. A colleague at the time wrote: ‘He was of a poor appearance, a mere youth, coming against giants; yet the wisdom of man was made to bow before the Spirit by which he spoke.'

Disinherited and turned out of home by his parents, Parnell set about the work of the gospel. Sometimes with a partner, sometimes alone, he went from house to house, as his colleague reported, ‘preaching, praying, exhorting, and turning the minds of all sorts of people to the light of Jesus.’ He was ridiculed for his size, and often after preaching he was exhausted. Faith kept him going. Hearing that two Quakers had been whipped at Cambridge, he went there and preached himself.

Finally, Parnell was arrested and imprisoned in Colchester. “I am committed to be kept a prisoner, but I am the Lord’s free-man,” he wrote. His jailers starved him for days at a time, then let him climb down a rope to get food. The jailer’s wife and daughter used to beat him, and on occasions he was locked outside in mid-winter. It was too much for his weak constitution. One day he had no strength left to climb the rope but fell to the concrete below, and died of his injuries, aged 18. He was the first of several hundred Quaker martyrs. His last words to the Essex brethren were: "Be willing that self shall suffer for the truth, and not the truth for self."
Posted by Trevor Saxby at 23:35 No comments: