The Essence of a "Soul Friend": Directness 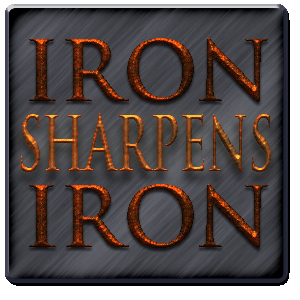 Another key aspect of the Celtic Christian "anamchara" (soul-friend) relationship was directness: the honesty and trust which enabled the challenging of one another on occasions.

Edward Sellner records the example of the godly woman Canair, who at the end of her life determined to visit the saintly Senan at his monastery on Inis Cathaig (Scattery Island in Munster). Senan met her at the jetty and told her to go to her sister's home on another nearby island. "That is not why I came", said Canair. "I came to find hospitality here."

"But women are not allowed on this island," Senan replied, to which Canair retorted: "Christ suffered for the sake of women as much as for the sake of men. Women as well as men may enter the heavenly kingdom." "You are persistent!", commented Senan (and we will never know the expression on his face). "Well then," said she, "will I get what I asked for? Will you let me live and die on this island?" Convinced, Senan granted her request.

Another example concerns Brendan the Navigator (referred to in the last post), who on his travels came to the monastery of Emly in Munster, where the patriarch Ailbe had presided for many years. Brendan burned with questions, but Ailbe's was a silent order! The monastery schoolmaster (who ipso facto was allowed to speak) had to rebuke Brendan and his companions for chatter. But Brendan persisted and Ailbe, recognising in the young man all the qualities of a future leader, broke his own rule and spoke, teaching him many things.

'Soul friend relationships are characterised by mutuality; a profound respect for each other's wisdom, despite any age or gender difference; and the awareness that the other person is a source of many blessings.'

It is this foundation of complete respect and affection which gives the platform for brotherly correction. As the Bible puts it: As iron sharpens iron, so a man sharpens a man. [Proverbs 27:17]
Posted by Trevor Saxby at 14:50 No comments:

The Essence of a "Soul Friend": Affection 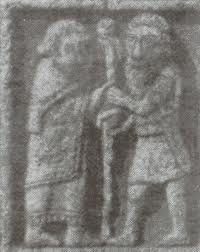 In his article, 'Early Celtic Soul Friendship', Edward Sellner demonstrates that in 6th century Ireland, all the movers and shakers of Celtic Christianity had their "soul friends" (in Gaelic: anamchara), and were in turn "soul friends" to others. The biographies of these saints 'reveal how common soul-friend relationships were between men and men, women and women, and women and men.'

Pride of place must go to Finnian (470-549), founder of the great monastery at Clonard in County Meath, where it is said that up to 3,000 pupils came to sit at his feet when he expounded the scriptures. If St Patrick had been the pioneer, Finnian was the father of the church in Ireland. 'It was he who tutored and acted as a spiritual guide to so many of the early founders of the other large monasteries, such as Columcille [Columba] of Iona and Ciaran of Clonmacnoise.'

Finnian genuinely loved his disciples. In his letters to Ciaran, he would call him 'dear one' and 'o little heart', always adding a personal blessing.

In some cases, these deep, mentoring relationships came about through a disciple choosing a master, but in the case of Kevin of Glendalough, he was entrusted as a child to the wise care of three monks who became as dear as fathers to him.

Kevin and Ciaran were true heart-friends. When Ciaran lay dying, he refused to let go on life until Kevin had come. When Kevin came, the two spent many hours in loving conversation, then shared Communion together. Ciaran blessed Kevin and gave him a little bell as a sign of their lasting unity. Then he died.

Women had these relationships, too, and not just among women. Ite (or Ita), abbess of Killeedy in County Limerick, was mentor to so many male leaders that she is known as "the Fostermother of the Saints". She was especially close to Brendan, sometimes called 'the Navigator' because of his voyages. Their biographers record how Brendan would smile warmly whenever he thought of Ita, many miles away; and how Ita would feel the slow drag of time whenever Brendan was away. And in the 8th century "Liber Angeli" we read: Between Patrick and Brigid, pillars of the Irish, there existed so great a friendship of charity that they were of one heart and one mind.
Posted by Trevor Saxby at 16:09 1 comment: 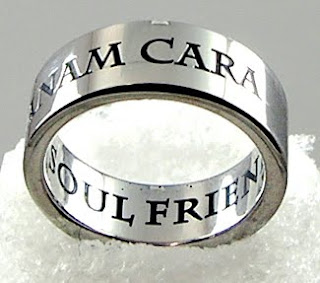 We've looked at what some of the big names in 4th century 'Eastern' Christianity had to say about Christian heart-friendship. Now we need to go West, and a couple of centuries later, and look at the equivalent in Celtic Christianity.

At which point I discover that someone has already done the work: Edward Sellner, Professor of Theology at St Catherine's University, Minnesota. In several articles and one book, he has waded through the biographies of the early Celtic missionary saints and extracted plenty of material on friendship. So in what follows, I am simply offering a résumé of some of his findings, while happily pointing the interested reader to Sellner's works.

Hagiography, the writing of the lives of saintly men and women in history, is not without its pitfalls. To what extent were some, less praiseworthy, deeds or traits edited out? Are quotations genuine and from written sources? Or did the aim of 'creating' a saint override all other considerations? The need for proven miracles (in order for the saint to be officially recognised as one) can lead to seemingly far-fetched stories. And finally, symbolism and symbolic acts play a large part, and we can never be sure whether our interpretation of that action was really what was in the saint's mind at the time.

All that said, there is plenty to be found that points to a developed and greatly valued concept of heart-friendship, which in Celtic tradition was called "soul friendship". Over the next few posts I would like to explore these examples further, to see how relevant the ancient wisdom is to today's dislocated and lonely world.
Posted by Trevor Saxby at 15:01 No comments: