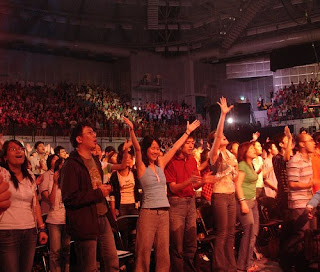 Before delving further into Christian hymnody, I must thank Jeffrey O'Rourke for pointing out that my quotation from Origen in the last post was taken rather out of context. Origen is defending Christians against charges levelled by a pagan, Celsus, that they have some arcane Christian tongue for secret rituals. So Origen is not describing a particular worship service; rather he is saying that Christians sing and pray to God using their mother tongue - wherever they may be. There is no "Christian tongue"; God hears us no matter what tongue we use. He is delineating a principle, not a practice.

One thing that surprises me with early Christian worship is that singing praises does not appear in the list of things the first believers devoted themselves to in Acts 2:42, namely the apostles' teaching, the breaking of bread, fellowship, and prayers. The First Apology of Justin Martyr, dated c.155, describes a Christian worship service. The emphasis is on ritual (baptism / ablution and Holy Communion), not singing.

This all seems oddly at variance with the Apostle Paul's exhortation to address one another with psalms, hymns and spiritual songs, singing and making melody in your hearts to the Lord [Ephesians 5:19]. A very musical response indeed! As with Origen, the context is primarily the believer's personal devotional life. But not exclusively: "addressing one another" can only mean a context of corporate worship.

We know that Jesus and the Twelve, before they went out to the Mount of Olives, sang a hymn [Mark 14:26]. But what, and how? Many Biblical scholars believe it would have been one of the so-called Hallel series in the Book of Psalms, consisting of Psalms 113 - 118. It was common practice among the Jews to chant these holy songs at the Passover table. Did they sing it responsively, their 'Rabbi' leading and the disciples responding? we shall never know.

In the next post, the early testimony of a Roman official gives us a few clues.

Posted by Trevor Saxby at 23:36 No comments: 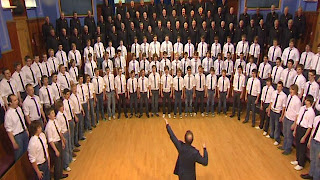 The 1st century traveller and writer, Philo of Alexandria, describes the singing of a contemplative Jewish sect called the Therapeutae:
"They rise up together and ... form themselves into two choirs, one of men and one of women, the leader chosen from each being the most honoured and most musical among them. They sing hymns to God composed of many measures and set to many melodies, sometimes chanting together, sometimes antiphonally."

Jewish liturgical singing took two forms: antiphonal and responsorial. The first is what Philo is describing: the division of singers into two groups in such a way that they are separated from each other; for example, to the right and left sides of the central aisle in the building. They then sing alternate parts, one side starting, the other responding.

This has continued in Christian worship ever since, not so much in congregational worship, but rather by the choir. Many a well-loved anthem has the two parts marked decani and cantores, indicating that, in the past, a group of church deacons would have sung one part, and a group of chosen cantors (singers) the other.

The second type of singing is similar, involving the priest or a perhaps a solo cantor singing an opening line and the congregation in unison singing the reply. Anyone who has been to a traditional sung service in church will be familiar with this.
Priest: O Lord, open thou our lips.
Answer: And our mouth shall show forth thy praise.
Priest: O God, make speed to save us.
Answer: O Lord, make haste to help us.
Priest: Glory be to the Father, and to the Son, and to the Holy Ghost;
Answer: As it was in the beginning, is now, and ever shall be, world without end. Amen.

The Old Testament book of Psalms really came into its own here, as not only did it allow the congregation to take God's word directly on its lips, but also the very verse form made for successful breaking down into statement and response (as in the above example). Even where it didn't, a congregational reply of "Alleluia" or "We bless Thy name, O Lord" did just as well. Tertullian, at the end of the 2nd century, refers to response singing of pslams in the church at Rome.

But what happened in a multi-national congregation where several langiages were represented? The writer Origen in the mid-3rd century gives the answer:


The Greeks use Greek, the Romans Latin ... and everyone prays and sings praises to God as best he can in his mother tongue.

If you have any comments on this post or the subject of hymns, please use the COMMENT box below. I'd love to hear from you. 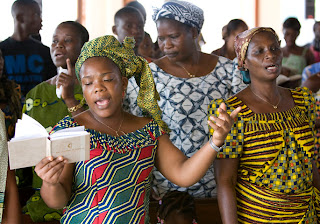 Another early Church father who understood the 'why' of hymn-singing was Basil of Caesarea (†379). In his Discourse on Psalm 1, he writes:


The Spirit mixed sweetness of melody with doctrine so that inadvertently we would absorb the benefit of the words through gentleness and ease of hearing. O the wise invention of the teacher who contrives that in our singing we learn what is profitable, and that thereby doctrine is somehow more deeply impressed upon our souls.

The conscious or unconscious absorption of a message, with music as its medium, is a powerful tool. Today's marketing world knows this very well, associating a product with particular mood music. From the 1970s onwards, technology has even allowed "backmasking" - the insertion of a subliminal secret message when a music track is played backwards.

All this was unknown to the first Christians, of course. What they did understand, however, was the need to confess spiritual truth aloud: not just to 'believe in your heart', but also to 'confess with your lips' [Romans 10:9]. Or in Basil's words, to impress doctrine more deeply on their souls.

For this they had a clear and obvious model: the Jews. At first, Christianity was a Jewish sect. The early Christians continued to worship at the Temple and to attend synagogues. It was therefore inevitable that Jewish methods of performing music were incorporated into Christian worship.

In particular, the church continued to use the book of Psalms. Basil again:

Now the prophets teach certain things, the historians and the Law teach other, and Proverbs provides still a different sort of advice, but the Book of Psalms encompasses the benefit of them all. It foretells what is to come and memorializes history; it legislates for life, gives advice on practical matters, and serves in general as a repository of good teachings.

In other words, if it is important to confess God's truth aloud, then how better than to sing scripture. Not only is there no risk of emotionalism or error, but also the addition of music aids the memorising of the words.

How exactly this was done - and what implications that might have for today, I hope to look at next time.

Posted by Trevor Saxby at 22:27 No comments:

A subject that fascinates me is that of Christian hymnody, so I intend to explore the subject in a few posts here. First of all, why hymns at all?

In the introduction to his Exposition of the Psalms of David, the medieval theologian Thomas Aquinas described the singing of hymns thus: A hymn is the praise of God with song; a song is the exultation of the mind dwelling on eternal things, bursting forth in the voice.

It would seem that, for the first Christian centuries, believers sang their hymns without stopping to analyse the process. One of the first who did was John Chrysostom (347-407). In his 'Exposition on Psalm 41', he points out that music is an integral part of the human condition: To such an extent, indeed, is our nature delighted by chants and songs that even infants at the breast, if they be weeping or afflicted, are by reason of it lulled to sleep.

Mixing this innate sense of music with the power of words is, Chrysostom continues, a powerful vehicle, affecting the intellect and spiritual standing of the singer.

When God saw that the majority of men were slothful and that they approached spiritual reading with reluctance and submitted to the effort involved without pleasure - wishing to make the task more agreeable and to relieve the sense of laboriousness - He mixed melody with prophecy, so that enticed by the rhythm and melody, all might raise sacred hymns to Him with great eagerness. For nothing so arouses the soul, gives it wings, sets it free from earth, releases it from the prison of the body, teaches it to love wisdom, and to condemn all the things of this life, as concordant melody andsacred song composed in rhythm.

In words very relevant to today's ipod culture, Chrysostom warns that there are bad words and bad music too, and these can similarly affect the human soul. "Those things that are lascivious and vicious in all songs settle in parts of the mind, making it softer and weaker." That is why, he maintains, the devil is keen to fill the mind with dirty things through music.

From the spiritual hymms, however, proceeds much of value, much utility and sanctity, for the words purify the mind and the Holy Spirit descends swiftly upon the mind of the singer. For those who sing with understanding invoke the grace of the Spirit.