The Country Boy Who Fathered a Nation - Conclusion 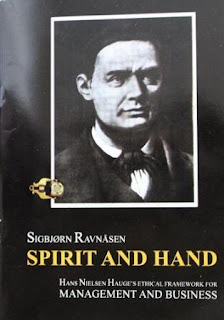 Hauge spent his last years on a farm near Christiania (modern Oslo), bought for him by his friends. Years of imprisonment had weakened his body but not his spirit. His home became a centre for Christian life, visited by many. He welcomed both spiritual and secular leaders who came to him for advice.
He wrote a number of books and articles, mainly spiritual but some economic. Two years before his early death, he gave this testimony to God's faithfulness and dealings.

I am 52 years old and have tasted Christianity's joy and strength, which had enabled me to leave my father's house and to offer up my body's peace and my worldly goods. I have put my life in danger of death many times, wandered alone through and over many wild woods and fells. I have seen many loathsome forms of sin. But in all this, nothing has been able to disturb the peace and the divine joy I have through the teaching of Christ. My consciousness is at one with it, and I only want to live according to its command.
In the darkest of prisons, where I have sat for my testimony's sake, I have had spiritual joys that exceed all the world's glory and joy. In a miraculous way, power is granted to all those who receive it in their inner being, such that their souls become sanctified by His reconciling grace. From this flows that purity and that friendship that far exceeds all other morals and friendships in the worlds. Let it happen!

At the end, Hauge was bedridden - but still preached. His last exhortation was: "Follow Jesus!" He died, his face radiant with joy, exclaiming, "Oh, You eternal, loving God!"

That was by no means the end of the story! Some of his followers held important positions. Three of them took part in the first Norwegian Parliament in 1814, when Norway became independent from Denmark after 400 years of Danish rule. The whole nation felt the effects of Hauge’s influence - spiritually, politically and financially. It can truly be said that he fathered the new nation.
Hauge's pioneering work in economic justice and ethical business continue to inspire today. Journalist Sigbjorn Ravnasen has written a book (very hard to find, even on Google) on Hans Nielsen Hauge's Ethical Framework for Business and Management . Ravnasen writes:


"When Norway became an independent nation in 1814, these kingdom values were integrated into the rhythm of daily life and were institutionalized into laws, school curricula and business practices in Norway. Economic conditions improved and led to the eradication of poverty in the land. Today, Norway continues to be the best country in the world in human development for the seventh year in a row. Norwegians have imbibed this spirit of volunteerism and have stretched their sense of responsibility from involvement in their local community beyond to the global community of nations. So Norway has the highest ratio of missionaries per capita, and (most unusually) in holistic and transformational servant-leadership roles."

In 2005 the Hauge Institute was founded. Its aim is to raise awareness about the person Hans Nielsen Hauge, his ethical thinking and topicality; to bring inspiration to the business community, to leaders, research, education and society. Based on the thinking and practice of Hans Nielsen Hauge, the Hauge Institute will focus on the ethical dimension in three main areas: Leadership, Entrepreneurship, and Trade and the Environment.